Bleeding Bongos… sorry, rephrase that… bleeding the coolant in Bongos, comes up repeatedly on Bongo social media and forums. In this section, I will continue to add some of the most useful advice, as it becomes known to me.

Water and antifreeze/summer coolant
The whole system holds about 13 litres so you will need 4½ to 6 litres of antifreeze in your system. It has been recommended to use red antifreeze – Triple QX. (Three bottles). It has also been recommended not to mix antifreezes (many other vehicles use blue), so perhaps, where necessary, flushing thoroughly, refilling, bleeding, etc.

What’s the difference between antifreeze colours?
From what I’ve read, it seems that blue lasts about 2 years and red up to 5 years. Some colours can be mixed, but apparently, mixing blue and red causes it to form sludge. Also, although frost protection may show as adequate when testing, it seems to be that the corrosion inhibitors can deplete over time, but less so in the red mixture. (The Blucol website offers some useful comparison information). You can look at an original forum thread on the subject, here.

‘Best tip is to fill through the bleed tube and make sure you give the lower hose, lots of squeezes as the van is running up to temperature.’ – Julian Rogers

Bleeding a 2.0 Ltr Petrol Bongo
2.0 Ltr petrol engines are bled like ‘normal’ vehicles. You bleed using a drain plug and fill through the header tank – none of the palaver of the diesel and V6 petrol engines. (No bleed tube, but a bypass connection back to the de-gassing tank and uses the third port at the top left-hand side to feed the gasses back into the tank directly).

Bleeding a Diesel or a Petrol V6 Bongo
Take a look at the videos below, introduced by Ian Maynard (aka Bongo Master) of Bongo Fury, showing the bleed process done by Haydn Callow and Kirsty (aka Missfixit70). The method demonstrated is probably the longer way of bleeding – taking up to 40 minutes, but nevertheless, is very thorough.

Note: You may need to watch the first video on YouTube (link below, or on video after pressing play).

Part 1 of the Bleeding a Mazda Bongo/Ford Freda (All videos produced by Missfixit70, Haydn Callow and Northern Bongolow, to help Mazda Bongo owners, Ford Freda owners, and garages, to understand what is involved, and what to expect, when refilling the Bongo coolant system. They also add the disclaimer that ‘this Method is not the only method. It is not written in stone. It is purely a demo to show you our method’. The videos have been included below for ease of access).

Some people have said they do the following:

Note: Whichever method is used, you will probably continue to see very small bubbles, created by the water passing through the water pump. The main thing is to rid the system of larger air bubbles. 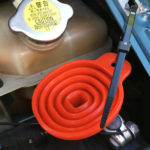 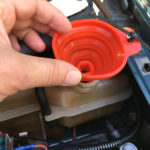